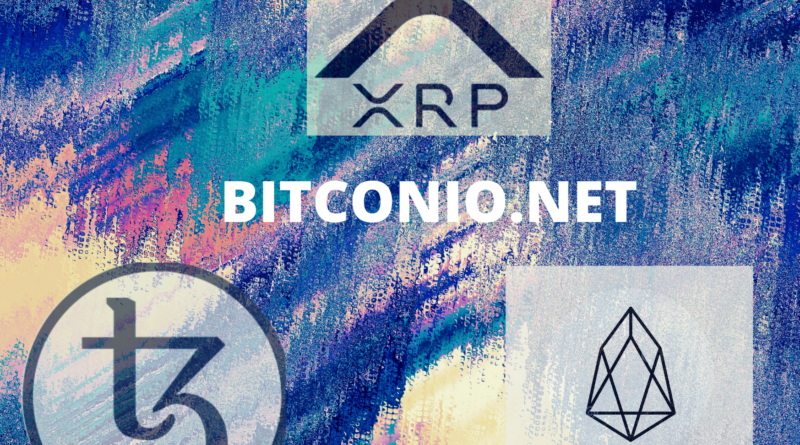 The Cornell University report reveals that XRP, EOS and XTZ are used for bogus transactions.

Although scalability has been seen as a bottleneck for major projects such as Bitcoin and Ethereum, some of the most prominent technologies seem to be used only for SPAM.

Despite the significantly improved scalability claimed by many high-profile blockchain projects, there has been little effort to understand how their transactional throughput is used.

In this paper, the recent network traffic of three major high scalability blockchains, EOS, Tezos and XRP, over a period of three months is reviewed.

The analysis reveals that only a small portion of the transactions are used for value transfer purposes. 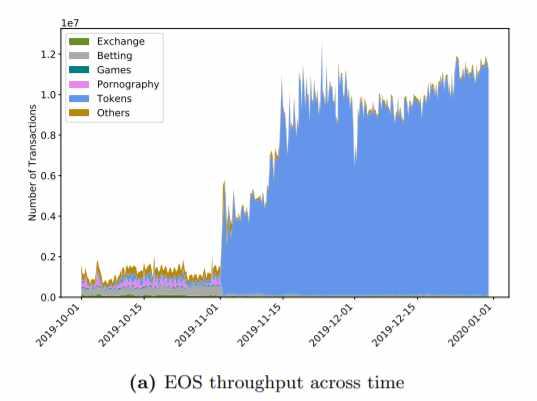 Over a period of three months From 1 October to 31 December 2019. Transactions are stored on 165,000 blocks, corresponding to approximately 121GB compressed with gzip. Most of the shares represent transfers, three out of five of the major senders send a large majority of their transactions to another account. These are somewhat similar to RPC calls in non-chain applications, but are, in the case of EOS, executed in a chain. Most of the other transactions are sent to transfer some activity – EOS – or some other type of token available on the EOS block chain. 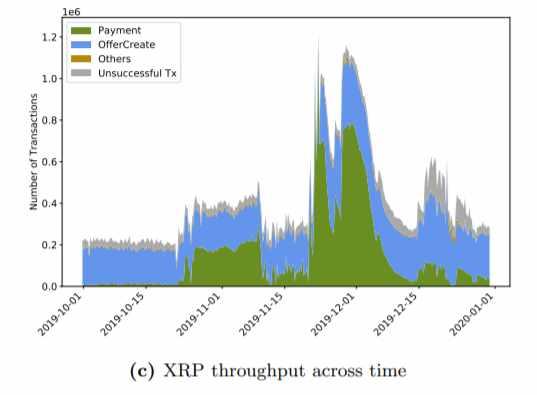 In total, collected more than 2,000,000 blocks covering 3 months of data, for a total of more than 150 million transactions. The total (compressed) size of the data is about 76 GB. From 1 October 2019 to 31 December 2019, for a total of 90 thousand accounts managed collectively, 150 million transactions are recorded, or an average of 1.7 thousand transactions per account. The breakdown of the number of transactions for the account is very distorted. Approximately one third (30
thousands) of accounts were processed only once during the entire observation period, while the 18 most active accounts
accounts are responsible for half the total traffic. With the sole exception of rs9tBKt96q9gwrePKPqimUuF7vErgMaker, all of these accounts share suspiciously similar patterns:

1. over 98% of their transactions are Offer Created;
2. they are either descendants of an account from Huobi, or often trading with descendants of Huobi;
3. have all made transactions using CNY;
4. their payment transactions make substantial use of the same destination tag 104398, a field similar to
a bank reference number – foreign exchange and gateway, used to specify which customer is the beneficiary of the
payment.

Average traffic over three months on blockchain tezosIn total there are 131,801 blocks counted, containing 3,345,019 transactions covering 3 months of data, from 29 September to 31 December 2019. The total size of the collected blocks represents about 560 MB of data compressed with gzip. Most of the main Tezos senders seem to follow a similar pattern: sending a small number of transactions (between 15 and 45) to many different accounts. The important thing to note is that 4 out of 5 of these accounts are not contracts but regular accounts, which means that the transactions are most likely automated by an off-chain program.

With EOS and XRP, most transactions are similar to DoS attacks: 95% of transactions on EOS were triggered by the launch of a still worthless token; and only 2% of transactions on the XRP ledger lead to value transfers. For Tezos, since transactions per block are largely outpaced by mandatory validations, most of the production, 82%, is occupied for consent maintenance.

The three blockchains studied in this paper demonstrate the ability to perform high throughput, however, their enormous potential has not yet been fully realized for their intended purposes.

The study, conducted by the researchers, Daniel Perez , Jiahua Xu , Benjamin Livshits, is very articulate and rich in graphics and numbers, for further study we recommend reading them.

If you are interested in the original document, go HERE and take it !